Down below is EVERYTHING you need to know about Warzone Season Two which was released on February 14th, 2022. Be sure to follow @WarzoneQG on Twitter for up-to-the-minute news.

Call of Duty®: Warzone™ Season Two lands with new content and quality-of-life improvements across the board. Prepare for some heavy weaponry… and all of the following: 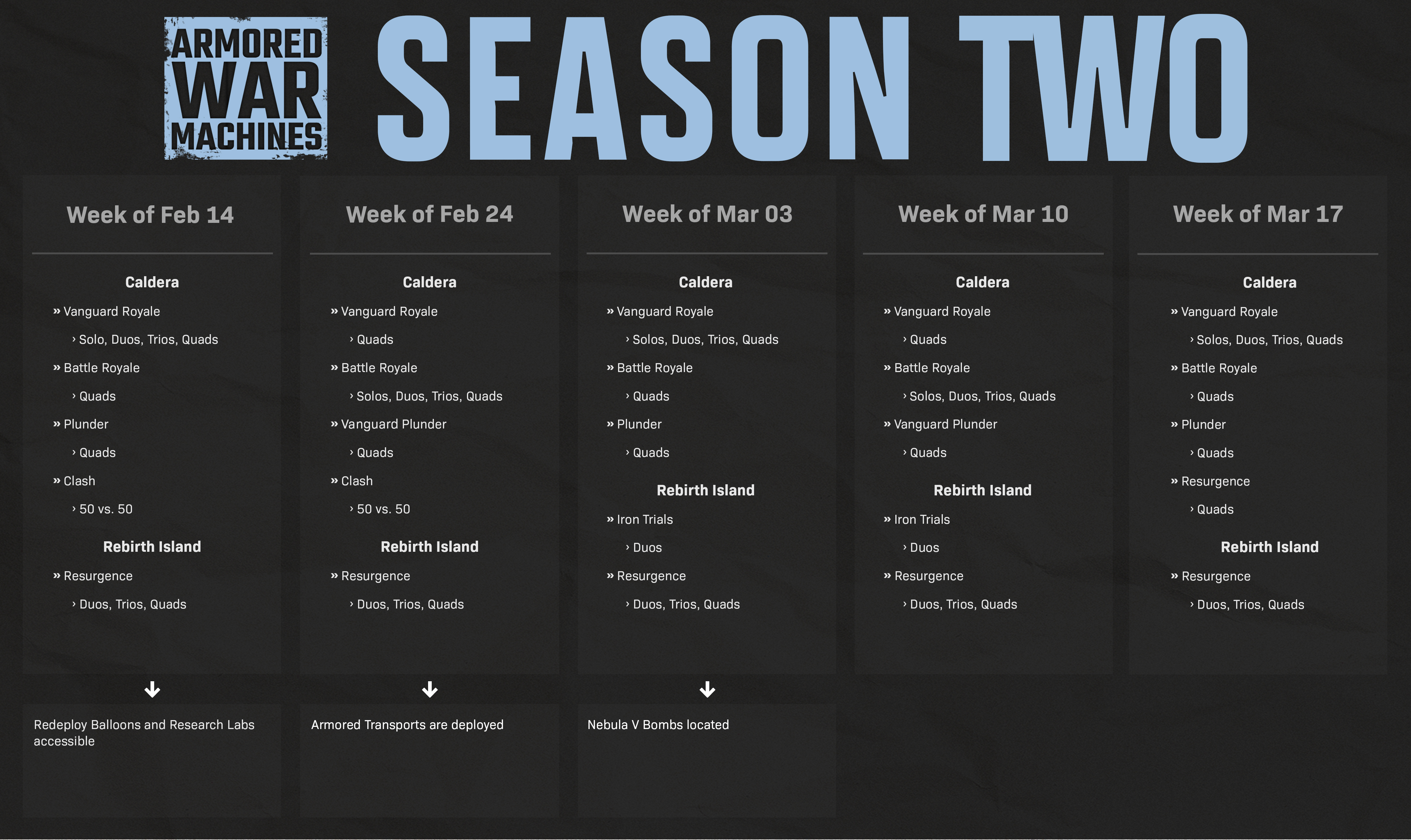 For regular updates about the Playlist and other Scheduled Events, check out the dedicated Warzone Trello Board. 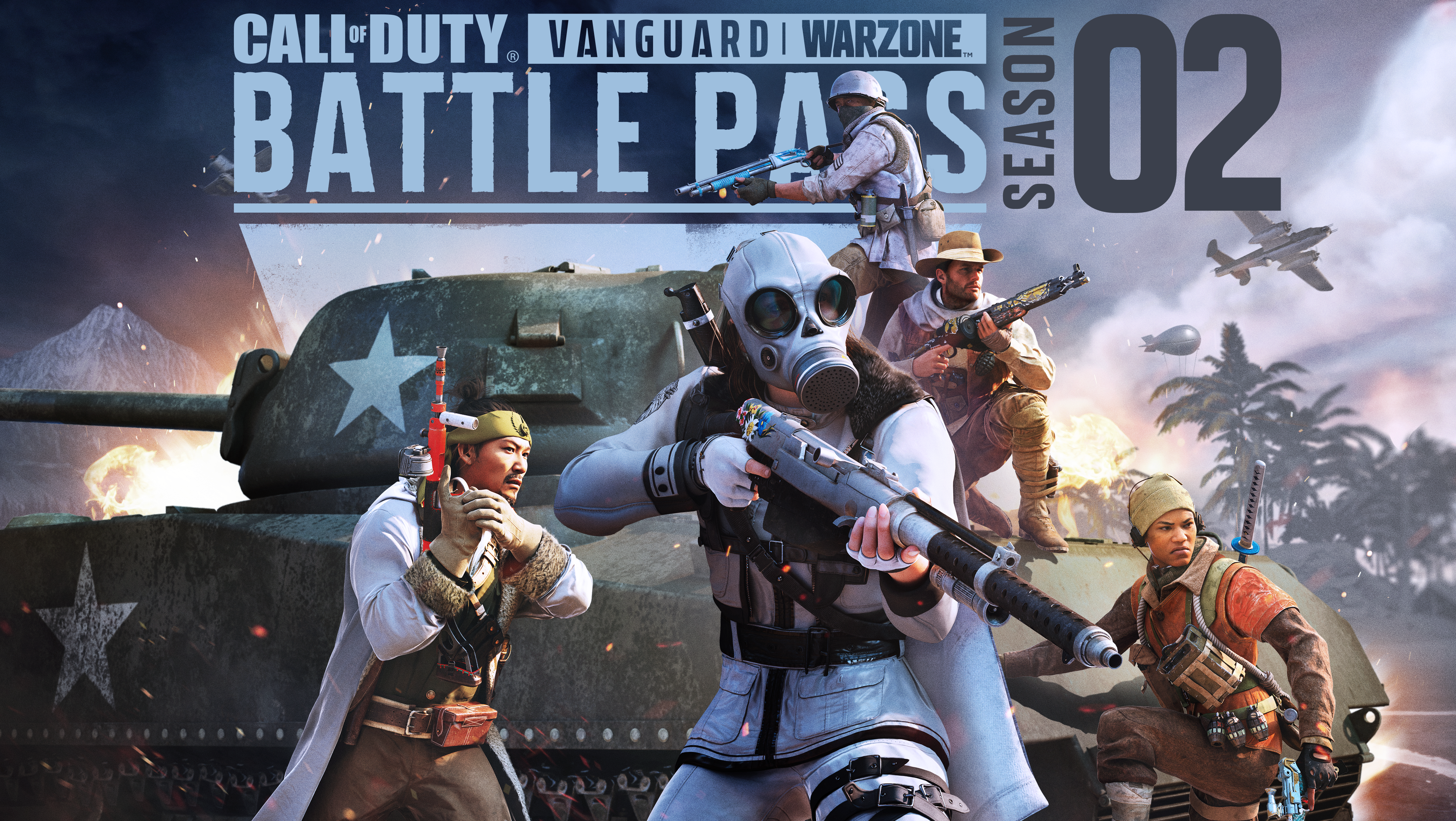 The Season Two Battle Pass is reinforced with incredible value, from dozens of free items in the Battle Pass System to Legendary content across all 100 Tiers:

For more information about the contents of the Season Two Battle Pass, check out the official blog here!

The source of Nebula V production has been identified. Operators may infiltrate at their own risk.

This Event is split into several phases that will roll out over the coming weeks. With launch, Players can expect to see:

This new take on Clash pits two teams of up to 48 Operators in a Deathmatch with wild events and power-ups. Operators drop in with their Custom Loadout, which can have any weapons from all three Chapters, and a Field Upgrade. Each kill earns their team a point, with the first team to reach a set number of points, or the team that has the most points when the time limit expires, claiming victory for their massive faction.

At its core, Rebirth Iron Trials is a Battle Royale game mode — the last team standing wins, the Circle Collapse shrinks the playable area to promote engagements, and those who die earlier in the game have a chance to respawn if they win a duel in the Rebirth Island Gulag.

However, Iron Trials brings numerous fundamental changes to this traditional Battle Royale formula. All of them are meant to give players the chance to prove themselves as truly elite Operators — which we will detail in future notes closer to the mode going live on March 3rd.

In the meantime, here’s a sneak peek at the Calling Card reward!

The Resurgence game mode we all know and love returns to Caldera, now with unrestricted access to all Operators and Weapon Loadouts alongside additional improvements – which we will detail in future notes closer to the mode going live on March 23rd.

We’re stripping Battle Royale down and moving back to basics for Season Two. We want Battle Royale and Vanguard Royale to each have their own distinct identities. To achieve this, we are focusing-in on what makes these rulesets unique… the tools we provide our players, the pacing, the objectives, etc.

Here is an overview of the changes Players can expect to see:

We’ve been really happy with the response and feedback to Vanguard Royale, with a lot of the sentiment emphasizing how the mode feels fresh and different from the core Battle Royale experience. With that said, we want to go all in on these differentiators and spread the two modes out to offer more variety in how Players choose to experience Warzone.

This newly named Chemical Factory has a similar layout to the location it replaced, but with several notable differences, including enemy soldiers who protect the facility and a trap that can be sprung in the central building. There are several more interior spaces to explore, from the main factory floor to watchtowers with impressive sightlines over the facility and its surroundings. The river runs green with Nebula V’s by-product, but it is completely harmless.

Seven research laboratories are distributed around Caldera and visible via hand-drawn yellow circles on the Tac Map. These locations hold high-value Loadout items including Gas Masks and Nebula V Ammo.

Before we dive into specific Gameplay additions and changes, we want to outline some changes that apply across the entire game:

A tip for parsing the following changes: An attribute can increase and be detrimental, or decrease and be beneficial. While considering the below changes, it is recommended to focus on the “down from” or “up from” language.

All Vanguard Weapons have had their Ballistics behavior adjusted to more closely match MW and BOCW Weapons.

There are two parts which comprise the Stats of the Kar98k (VG): the Weapon and the Base Optic. In the case of the Kar98k (VG), much of its ADS Speed stats were coming from its Optics. We have decided to take that ADS Speed and spread it out more evenly amongst its Attachments. The end result is a more consistent range of ADS Speeds that will not vary as wildly depending on the Optic alone. When considering the changes made to Optics and other Attachments, this results in a net increase to the Kar98k’s (VG) ADS Speeds. See the Optics section for additional details.

Trading damage now for damage later will have many Players still equipped with Incendiary wondering why they lost an even, or slightly advantaged fight. For now, Incendiary will provide a niche use on specific Weapons where shots are intermittently hit, or fire is unreturned. Players with above average aim will want to find a new type of Ammunition to lock and load.

As a result of Lengthened’s monopoly over Bullet Velocity on Vanguard (VG) Attachments, build diversity and Weapon viability has taken a hit. By shifting this Bullet Velocity into a wider variety of Attachments, we are aiming to provide more viable builds and meaningful choice within this category.

Lengthened aside, we have further changes coming to increase diversity in the Ammunition category. These changes will ensure the category fulfills more of a playstyle supplemental role for builds rather than a necessary enabler.

The following Vanguard Optics have had adjustments to their appearance and/or behavior. This potentially includes changes to ADS Speed, ADS Position (closeness to Optic), and Magnification Level.

Get access to Anna Drake for use in Warzone at Tier 0 in the Season Two Battle Pass and work your way up to the Legendary “White Mirage” Skin at Tier 100.

Get access to Thomas Bolt as part of upcoming Season Two Store Bundle offerings, to be detailed at a later date.

Get access to Gustavo Dos Santos as part of upcoming Season Two Store Bundle offerings, to be detailed at a later date.

The Season Two update will have a download size of approximately 14 GB for those who own the free-to-play console version of Warzone and are currently on the latest updates.

Note: PC users will also need 23 GB of additional space on their hard drive for the patch copying process; this is only temporary space that is reclaimed upon completion of the patch installation and is not an additional download.

Remember, the Vanguard download is not necessary if you are only playing Warzone, and vice versa.

Furthermore, for smaller overall file size, Players can choose to uninstall/remove other data packs if they are no longer needed.