Raven Software has revealed the Patch Notes for Season 5 of Call of Duty: Warzone, which shows off the Weapon & Attachments changes, new modes, events, and much more.

Here’s EVERYTHING we know about the Season 4 Reloaded update for Call of Duty: Warzone, be sure to FOLLOW @WarzoneQG on Twitter for the latest updates.

For the first four weeks of Season Five we will be supporting daily rotations on Mondays through Thursdays for some of our communities favorite game Modes, while weekends will be catered to an LTM plus our usual rotations.

On weekdays, one of the following modes will be rotated in/out daily:

Alongside the above, the following game modes will always be available on Mondays through Thursdays:

We heard from our community that you wanted Plunder in more regular rotation so throughout Season Five, Plunder is featured more prominently and we will monitor sentiment and engagement of this change.

Alongside this we are excited to debut “Rebirth After Dark” (R.A.D.), alongside the return of “Clash”, “Buy Back BR Solos” – and more…

For regular updates about the Playlist and other Scheduled Events, check out the dedicated Trello Board. 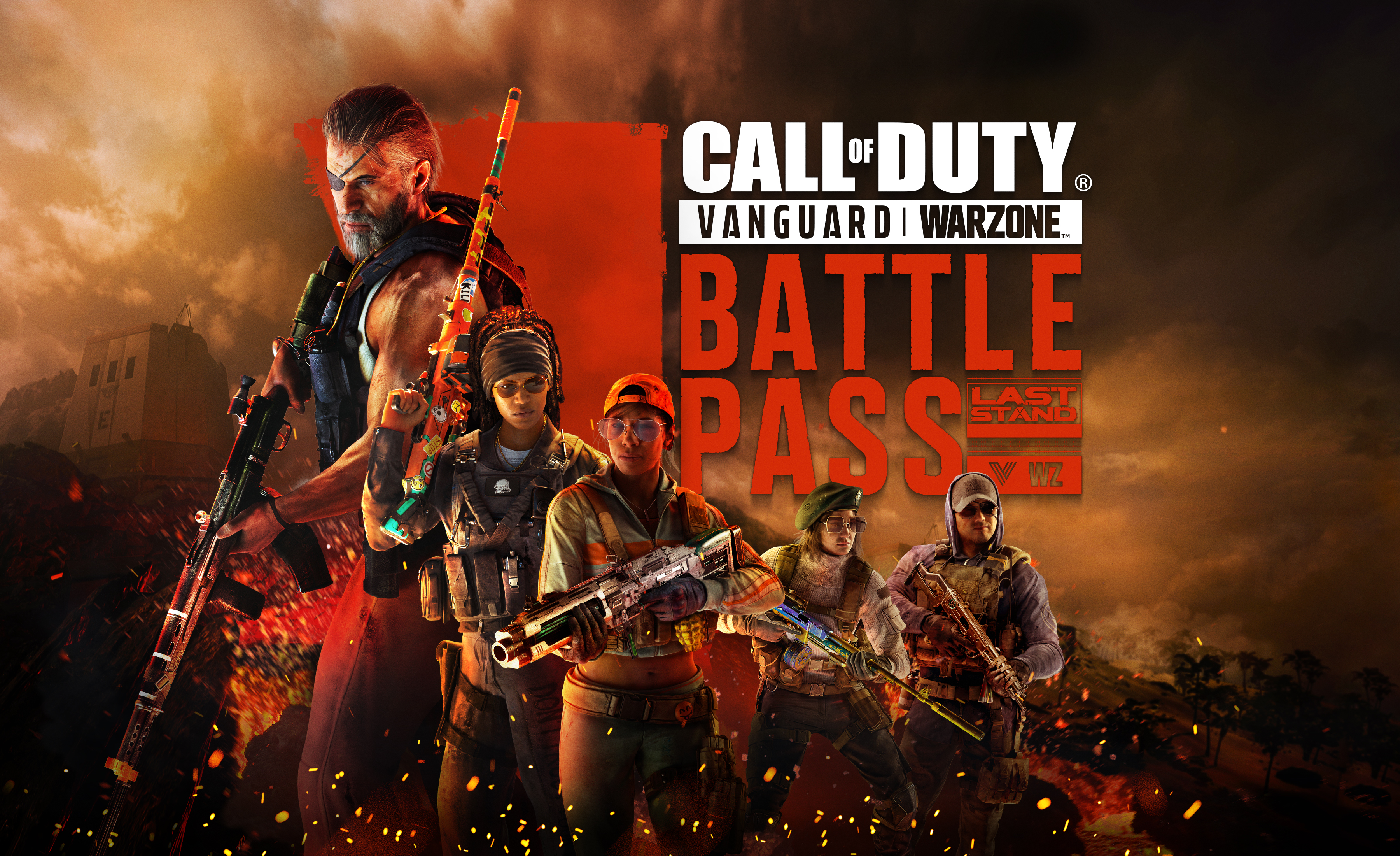 Choose your side and lead them to victory. Score faction points by collecting Villain or Hero Tokens or by contributing to them at the Buy Station in all game modes. Contributing to a faction will also discount one item across all Buy Stations.

The winning team’s unique Weapon Blueprint will be given to everyone following the event. Players also have the chance to earn other exclusive rewards like the Legendary animated “One vs. One” Calling Card, the Hero’s or Villain’s Weapon Charm, the “Conflict Spike” Melee Weapon Blueprint, the “Time Duality” Watch, and more.

In this limited-time mode inspired by Search and Destroy, you can choose to defend Caldera by defusing bombs around the island, or sabotage it by detonating the explosives at designated bomb sites. Witness two different outcomes, depending on your performance and your intent to cause chaos.

Some of the things to expect from this mode:

As mentioned in Season Four’s patch notes, we have been reviewing the sentiment and data for the pacing of Fortune’s Keep Resurgence, as the intent with the new map has always been for it to offer a similar time-to-action as Rebirth Island Resurgence. Thank you to all our Players who have engaged and shown love for the new map and the “Fortunes Keep Extreme” LTM. That said, we are happy to share that we have now made some adjustments based on your feedback:

With this increase in additional Players, we have also increased the availability of Supply Boxes as we have been happy with the pacing of looting relative to squad size.

Note: Private Matches will be updated later this season.

Heightened volcanic activity has been recorded at Caldera, with a major geological event occurring with the launch of Season Five. Battle around a transformed Peak as lava runs down the mountainside in all modes and shoots out over the island during Operation: Last Call.

No self respecting villain would operate without an evil lair. As such, Task Force Tyrants has claimed Peak and given it somewhat of a hazardous makeover… an interior creek with flowing lava, basalt columns and stepping stones, a giant, colorful, ornate crest for their secret organization, and a beautiful vista looking out over a wartorn Caldera.

Get back into the match with the new volcanic-themed Gulag, inspired by an old favorite.

The storm has cleared on Caldera, the sunlight peeking through the volcano’s billowing smoke.

Rebirth Island will also receive a special limited-time mode, “Rebirth After Dark”, on Friday September 2nd through Sunday September 4th that allows Players to experience this fan favorite experience after the sun has set.

In the absence of any recent changes to the Precision Airstrike behavior, we’ve still seen an uptick in Player sentiment and discussion around Precision Airstrikes lately. As such our engineering team have completed a detailed review of the system to make sure it is working as intended and as a result have made some changes to further improve and optimize the system. Note that Precision Airstrikes will continue to shoot through glass, balconies and wall-bang penetrable buildings.

We felt that C4 and ground loot Perks were too similar in appearance and presentation, so we’ve updated C4 to make it more distinguishable visually when compared to a vertically standing ground loot Perk satchel.

We have made many targeted Quality of Life improvements to the auto Gas Mask behavior over the course of this year, and with it being in a much better place for all of our Players – now is the time to take the next step to give Players more agency and control over their experience with a Manual Equip setting.

During Season Four we made a change to optimize the Loadout interface so that the cursor selection starts at the top of the list. Whilst we heard positive feedback on this change, we also heard feedback from others that this was less optimized for their playstyle. Enjoy!

We have made a change to Battle Royale to bring Planes inline with other vehicles. Upon review, it simply didn’t feel rewarding for Players to invest in eliminating enemy Planes only to see them respawn moments later.

Serpentine continues to be a top-3 pick in the blue Perk category after Season Four Reloaded’s update. As a result, we’re removing the bonus protection to Fire and Explosive Damage. This should also restore the value to E.O.D that Serpentine had cannibalized.

Later in the season we’ll be making an additional change that causes Serpentine to only be in effect while Tactical Sprinting, instead of regular sprint.

We felt we could bring more value to Battle Hardened, especially as it is now present as a lootable ground Perk, with our target for the effects of Stun and Flash to be mitigated to less than a second with the Perk equipped. Some Players may wonder why this change is happening now, to which our reply is that there may be a surprise in-store during Season Five that warrants this change.


Season Five is all about widening options even further by addressing the top performers to be more in-line, along with lifting up both individual Weapons and classes of Weapons that are under-utilized.

We’ve made a large amount of changes to these Weapons and expect to make some more following Season Five launch so that these Weapons are viable, but we don’t see a repeat of the DMR 14 (BOCW) meta.

They now have a glint on them, reduced recoil control, and adjusted ADS time. This will have a significant impact on the long-range playstyle, enabling wider options and not total domination from Vanguard Assault rifles.

Snipers are in a good spot, but we’re not done with them yet. Combined with the above, we are expecting many viable options and variability in long-range engagements.

In Call of Duty®: Warzone™ we’ve made some substantial differences to the EX1(VG) to better accommodate BR gameplay vs Vanguard multiplayer gameplay. The EX1(VG) has limited ammunition, increased recoil and substantially lower bullet velocity.

The unquestioned strength of the AS44 (VG) was encroaching on the sub-machine gun class and less its Assault Rifle brethren. We’re making a modification to the close-range damage profile and compensating with more recoil control, enabling the Weapon to perform as a more reliable Sniper-Support.

The KG M40 (VG) continued to climb after the last round of adjustments, so we’re making a further reduction of its long-range damage profile combined with some reasonable accuracy adjustments. The result is a Weapon that should exist firmly in the camp of “Newcomer friendly” but other Weapons will be preferable for higher skilled Players.

Season Four Reloaded’s newcomer struggled to find a firm identity in the long-range AR class. We’re making some all-round modifications to smoothen out the experience, while compensating for the slightly below average Torso damage profile with the most generous “Critical Box” of the Vanguard Assault Rifles, with the Neck now matching the Headshot multiplier.

Vanguard Marksman Rifles have been held back by their restriction of using Sniper Ammunition. In Season Five we’re making large changes to these Weapons to now use Assault Rifle Ammunition instead, along with rebalancing the handling and damage potential of each Weapon in the class.

Snipers have almost climbed to the ideal healthy usage rate, and for the first time we’re seeing a good spread of different Weapons being used depending on map and situation. With the rebalancing of some of the Vanguard Optics and a further reduction of flinch, we expect this category of Weapons to be in a solid position going forward.

We’re making some adjustments to widen the Close Range meta even further by making additional changes to the best performers, and giving some much needed attention to some old favorites.

Task Force Tyrants begin to deploy on August 24 with the launch of Last Stand, the fifth season for Vanguard and Call of Duty®: Warzone™. It’s good to be bad, and these are the worst of the worst. It’s time to get notorious.

First appearing in Call of Duty®: Black Ops II, Menendez orchestrated a cyberattack against automated drones, turning them against major cities across the United States and China.

The main antagonist of Call of Duty®: Ghosts, Rorke formerly led the Ghosts before being turned against them, paving the way for the Federation’s occupation of the United States.

Unlock Gabriel T. Rorke by purchasing his Bundle when it arrives later in Last Stand.

Seraph first appeared in Call of Duty®: Black Ops III as a playable Specialist. She is utterly devoted to furthering her father’s legacy by promoting the 54 Immortals’ objectives.

Unlock Seraph by purchasing her Bundle, which arrives later in Last Stand.

A Middle Eastern warlord and key antagonist throughout the Call of Duty®: Modern Warfare® series, Al-Asad is the second of “The Four Horsemen,” outranked only by Vladimir Makarov himself.

Unlock the infamous Operator via the Khaled Al-Asad Operator Bundle, releasing in the Store shortly after the launch of the Last Stand Season.

Additionally, players who have digitally pre-ordered either the Cross-Gen (console), Standard (PC), or Vault Edition (console or PC) versions of Call of Duty®: Modern Warfare® II will receive the Khaled Al-Asad Operator Bundle for free and will have immediate access once it becomes available in the Store, for use in Vanguard and Call of Duty®: Warzone™.

The Season Five update will have a download size of approximately 10 GB for those who own the free-to-play console version of Call of Duty®: Warzone™ and are currently on the latest updates.
Update Sizes

Note: PC users will also need 7.3 GB of additional space on their hard drive for the patch copying process; this is only temporary space that is reclaimed upon completion of the patch installation and is not an additional download.

Remember, the Vanguard download is not necessary if you are only playing Warzone, and vice versa.

Furthermore, for a smaller overall file size, Players can choose to uninstall/remove other data packs if they are no longer needed.